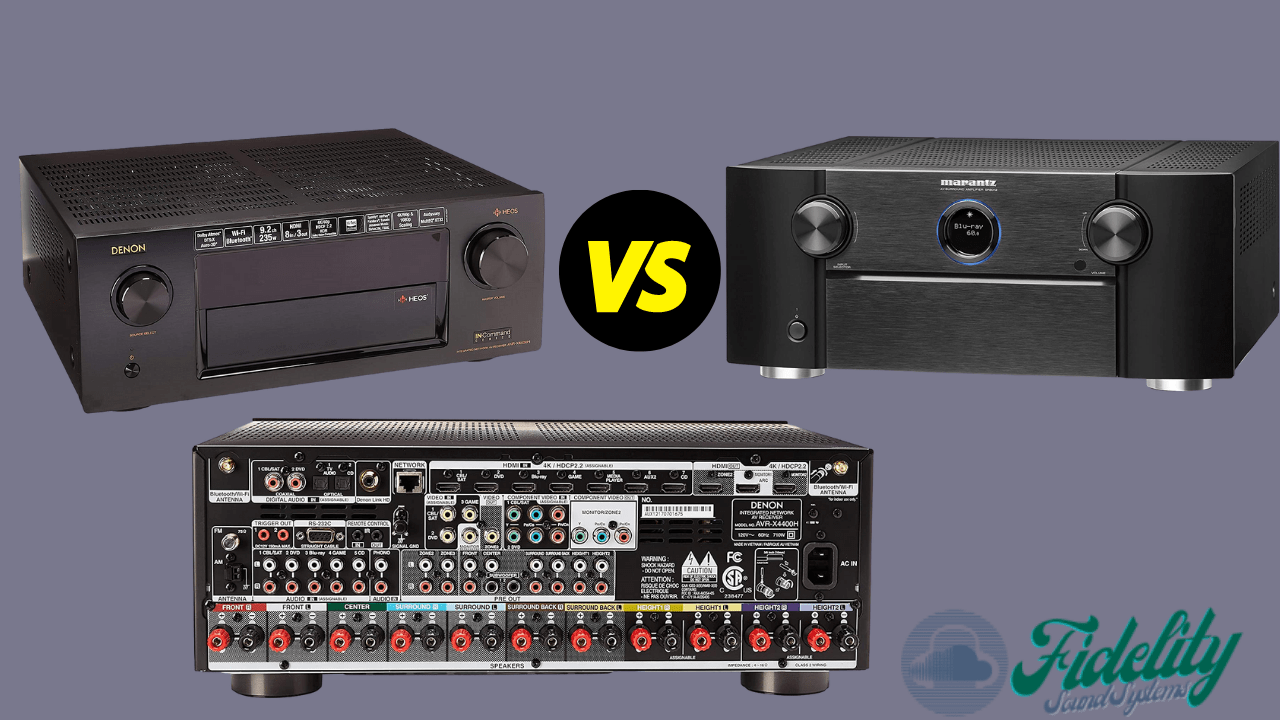 Marantz SR 7012 and Denon x4400h AV receivers are enjoying the recent surge in popularity for households seeking to buy an audio video receiver.

With the rise in demand for av receivers one might wonder, which av receiver is the better, Denon or Marantz?

After comparing Denon vs Marantz for sound quality, video processing and accuracy, Denon X4400H stands out as the best audio video reciever over the Marantz SR 7012 reciever.

While an argument can be made for Marantz and Denon  AV receivers comparatively looking like they are a match for match, Denon recievers deliver a far more superior audio and video processing accuracy you hardly get from Marantz SR 7012 recievers.

On the other side, Marantz SR 7012 is an excellent budget choice if you are looking for an affodable AV recievers, then getting this Marantz AV(available here on Amazon) is more ideal than the Denon x4400h. However, if you budget is not an issue, and you are going for the premium AV recievers, the Denon recievers are highly recommended.

These two are really both powerful av receivers that are flagships as well so i am going to make it very easy for you to decide which one to purchase as here on this article i will compare both the av receivers,from their strengths and weaknesses.

Both these flagships have got a lot to offer ,from dolby atmos to dts but lets face it there is always one which comes with better features than the other ,which im sure that is exactly what you are looking for, so i will start with the basic details.

It was an honor actually to get to test them out as they are both powerful av receivers but as always one has to come out on top and from my findings i guess this is the overall score i give each one of them respectively ,Denon x4400h scores at 79 and Marantz sr 7012 scores at 78.

The results are not too different because both av receivers are very good but Denon is just a litte more powerful.How i came to these scores you ask well following is the overview of each av receiver.

On the overview i will compare marantz sr 7012 vs denonx4400h ,i will reveal the strengths and weaknesses that they have in commom as well a the things that sets them apart, like the differences that they have that will help you to choose which one suits you best before you can go and finally purchase.

In terms of channels they have something in common as they both have 9 channel amplifiers but the denon is a bit more powerful than the latter.

The highlights are as follows:

Denon x4400h has got the following features

Passthrough: It has got AirPlay 2, DLNA, also has in terms of wireless connectins HEOS Ethernet, Wi-Fi,

Bluetooth and also include a USB port and Phono inputs.

Watts: it works on 125 Watts (8 Ω, 20 Hz – 20 kHz, 2 channel driven), like the latter also comes with Dolby Atmos, DTS:X capable, also HDR10, Dolby Vision, 4K Upscaling, 4K Passthrough, also AirPlay 2, DLNA, HEOS and in terms on wireless connetivity its not that different as well as it also comes with Ethernet, Wi-Fi, Bluetooth and a USB and Phono inputs.

As you can see from the features the reason Denon x400h gets the higher score,it is based on the specifications of the amplifier, the audio and video feature, the connectivity, the capabilities of the multizone,the radio and all the other details that you can see above.But dont be too quick to write off Marantz sr7012 yet,it also has some things on its favour like the pricing, it does not come with a huge price tag than its brother flaghips.

The following are the pros and cons of both the av receivers, the pros are what gives the av receiver an added advantage while the cons are the downside, mostly these come from consumers who have had first hand experience with the receivers.

The Denon x4400h Pros And Cons

The Common Strengths Of Denon x4400h And Marantz SR7012

Why Denon xx400h is rated or scored better than sr7012 since they have so many similarities you ask yourself? On the following section i will outline in detail the features and some specifications which are the reason why i came to a conclusion that Denon x400h is better than Marantz sr7012 despite their common strengths and common weaknesses.

what makes Denon sr4400h win is that it includes the following:

Users like me who have had the opportunity to use both the av receivers have said Denon seems to be more powerful when you are playing music you can increase volume to the maximum level but the sound will stay the same clear with no noise. Not to mention even though it seems to be an older model it has a really nice design,