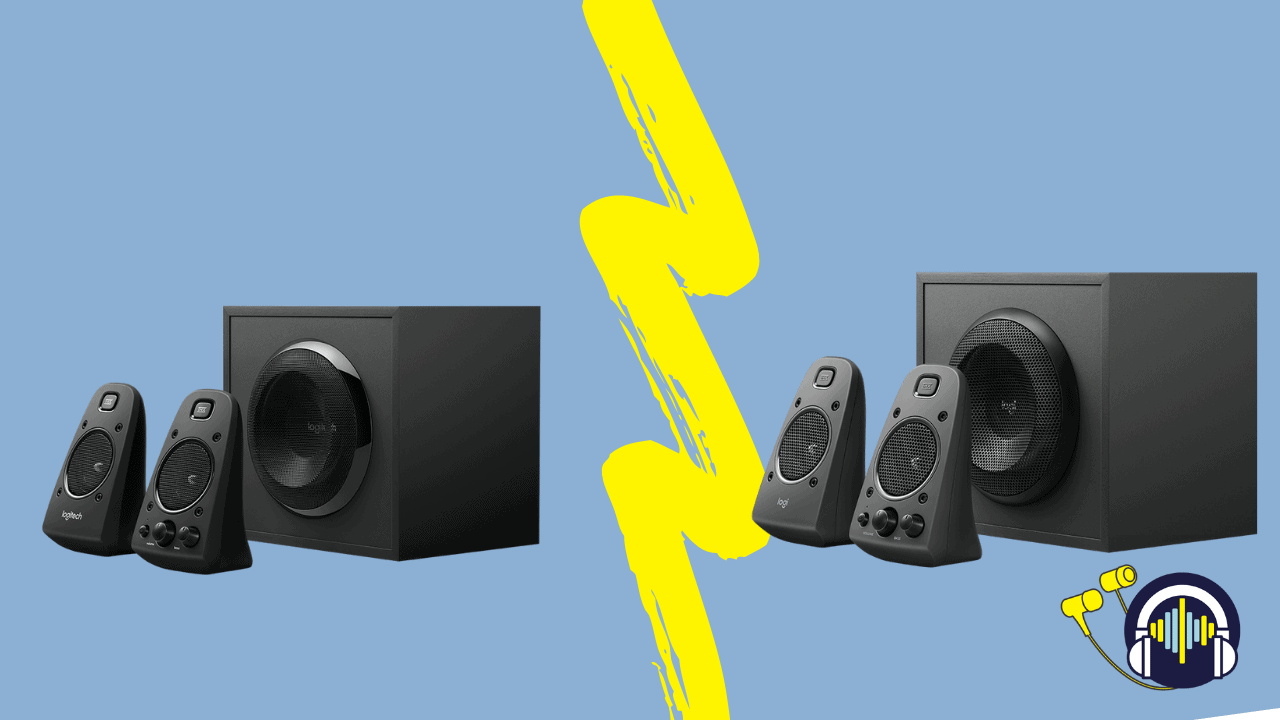 The main difference between Logitech z623 and z625 is the fact that the z625 provides twice the output of the z623 speaker output power. Comparing these two desktop speakers on looks and aesthetics alone, you wouldn’t spot the difference.

No lie; both speakers produce an outstanding THX rated sound quality. What makes Logitech z623 stand out is the output of 400 Watts at Peak with 200 Watts RMS of this thumping sound from each 2.1 speakers.

Therefore, Logitech z625 is the most powerful and an upgraded version of the two desktop models as it delivers a whopping 400 Watts at Peak with 200 Watts RMS of those coming from each speaker.

These two desktop satellite speakers produce clean and crisp high notes and their broad midrange makes them attractive, especially when you can deliver so much power without the reserve output you get from the woofer.

As you can see that each one of the Logitech z623 and Logitech z625 speaker delivers varying watts, and the subwoofers also pushes between 200 and 130 watts, respectively, making the Z625 the perfect option for anyone looking for a thumping house party with deep super bass.

Everything you need to know about these two speakers

systems, their advantages and disadvantages, and the specs

they come with you will find it right here in the article.

The Logitech z625 is a newer version which is considered an

logitech z623 but that is not entirely the case,both these

speaker have some unique features which i will shade some

light on, on this article.

A little About Desktop Speaker

Over the years we have seen many different types of speakers being made but the widely used speaker is the dynamic speaker.The sound source is mostly amplified or made stronger by connecting the speaker to the audio power amplifier before the signal is

sent to the speaker.

Logitech z623 speaker system is a certified thx from Logitech, and it

is a very powerful desktop pc speaker with a subwoofer. Logitech z623 provides high-quality sound or audio that places you right into your music, games as well as movies,it will keep you engaged.

gaming rig systems as it comes with a very powerful subwoofer

and two satellite speakers with 200w RMS of power.

The thx certification that this speaker system comes with

ensures that your audio is held to the perfect performance

It also has got rca and 3.5mm inputs, which allows you to connect it to multiple computers,DVD players, music players, tvs as well as game systems.

Its right satellite has got integrated controls that make it

Whenever you want to listen privately, you can use headphones as it comes with a 3.5mm stereo headphone jack.

The following are the pros and cons of Logitech

z623.These pros ans cons are based on customer

reviews on the internet.

The following pros and cons are based on the customer

reviews on Amazon and other sites.

· The sound quality is amazing

· The thumping is just perfect

· The subwoofer has got great bass, it has got clarity

it’s not too boomy it offers cinematic bass

· You get value for your money with this speaker

· It is perfect for tecno music as well as house music

· It is perfect for a regular size room

· This is perfect for watching films ,gaming as well as

· It offers some very powerful effects when you are

watching a film or playing a game

· The speaker system can also be used as a home

· The THX certification makes it one of the best you

· The product reliability is not very goid as most

customer complain that after five years of use the

· Speaker system is a bit costly hence not everyone

This speaker system is built with one optical input,two

3.5mm inputs as well as a stereo RCA input, it also

comes with its subwoofer and optical input from Logitech

It can also be connected to three devices at the same

time with no need to disconnect whenever one is

Switching between audio sources. The functions such as

volume, power as well as bass,3.5 mm headphone and

auxiliary input jack are all very easily accessible on the

right speaker of the system.

The 3.5 mm audio cable and an optical cable are all included, and you also get a one-year hardware warranty as protection from any damage.

The Logitech z625 is a speaker system designed to deliver the most accurate, perfect experience straight out of the

box. These speakers are tuned to exact the specifications

which is to deliver the artists vision right into the

To deliver some amped power, this speaker comes with

This speaker system immerses you with a crisp sound and thundering bass, whether watching an action movie, listening to music, or simply playing video games. You can literally feel the sound.

This speaker system supports some multiple inputs that

simultaneously include optical 3.5 mm as well as RCA

You can connect up to three compatible devices

such as a game console,a computer and a game

There is no need to disconnect when you are

You Get All Controls At Your Finger Tips

You can easily access power, the bass, the volume, the

headphone jack as well as the auxilary jack on the

the right side of the satellite speaker.

The following pros and cons are based on the customer

reviews on Amazon and other sites.

When it comes to performance as well as sound quality

the Logitech z623 and z625 are almost alike; what sets them apart is that Logitech added a few extra inputs options on the z625 and then called it an upgrade.

At the bottom of the satellite speakers, you will find some

rubber feet these are to prevent the satellite speakers

from vibrating or shaking when you are listening to music

at a higher volume.

These satellite speakers are designed to point at an upward angle, where the top the speaker is a little narrow and the bottom is wider.

On the right satellite speaker, you will find all the controls

on the front side of it; meanwhile, the left speaker is more

The controls that you will find on the right speaker are the power button, bass, and volume button. Both the speakers have got a front

firing that is 2.5 inches in length, they also have a sealed

driver that pushes the bass- foward.

In terms of color, the two satellite speakers have a matte

black finish that gives them a premium look,the drivers

are enclosed by a subtle rubber as well as a metal grill.

There isn’t much difference between these two speakers

systems, they are both very good, and both have got

Some very positive reviews on Amazon.At the end of the

day its all about the customer preference, you can still

purchase the z623 and get most features that come with

However, if you are really impressed by the extra inputs that are found on the Logitech z625, then it would be just fine to buy the z625 upgrade.