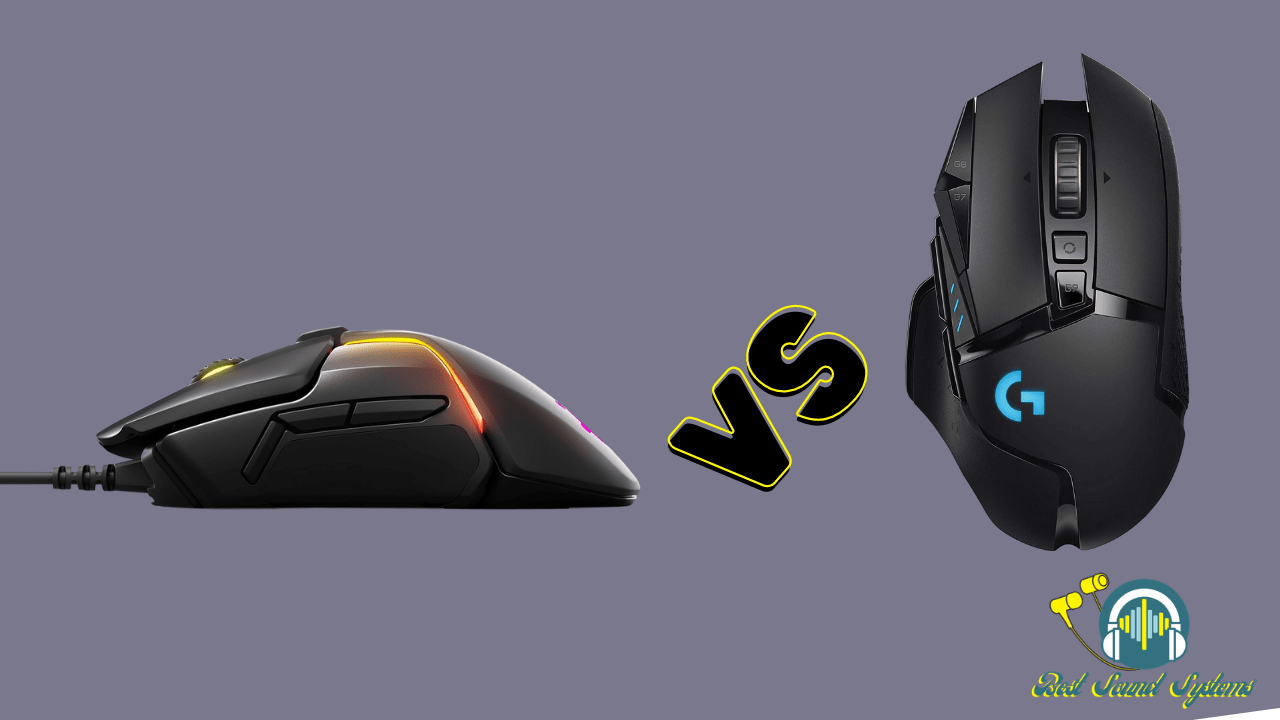 Which is better when you compare Steelseries rival 650 vs. Logitech g502 lightspeed?

Admittedly, Steelseries rival 650 and Logitech g502 lightspeed gaming mouse can be challenging to differentiate. Especially if you are a novice to gaming with the most advanced gaming peripherals.

Nonetheless, Logitech g502 lightspeed stands out as an excellent gaming mouse compared to Steelseries rival 650. My comparison between Logitech g502 and Steelseries 650 explores vital features to enjoying gaming with any one of these gaming mice. Features such as speed, comfort, and flexibility of your games, in the long run, were taken into account.

What’s The Difference Between Logitech Z623 And Z625

Soundbar is Better Than Speakers For PCs(Its not What You Think!)

To summarize the differences,

Having covered the basic differences between these two models, let’s explore each or these models individually.

The first model we are looking at is the rival 650. This gaming mouse is medium shaped and comes with multiple adjustable weights. On top of this, the Steelseries Rival 650 comes with fully programmable buttons, not forgetting the fact that you can choose between using a cable or the batteries.

With the flexibility and ergonomics, the Steelseries rival 650 gaming mouse is truly a one of a kind gaming companion. Let’s start on the weights

While some gamers love to have a light gaming mice, other gamers prefer much heavier ones. Either way, the Rival 650 has you covered. This mouse comes with weights in the box that allow you to add to the mouse if the mouse just seems to light for you.

On the left side, the mouse comes with 8 slots, which are designed for you to place in the weights, each of which weighs about 4 grams. Generally, the steelseries model has a weight that ranges from 121 grams to as heavy as 153 grams.

This makes the steelseries model only slightly smaller than its competitor. Because of its miniature size to the Logitech G502, it is best suited for palm grip.

The Steelseries Rival 650 is built in a Fibre Reinforced Plastic (FRP) material. This makes the rival 650 very strong and able to take a couple of falls. The outside of the material is coated with silicone, which helps with swiping gameplay.

Unlike steelseries’ older models, such as the rival 600 which has about 3 buttons, the Rival 650 is built with a maximum of 7 buttons, all of which are fully programmable. If you are not a fan of these, you can let them shine and decorate your gaming mouse.

These extra buttons are located on the side, and angled perfectly to each other to allow you to manipulate them during a game easily. That being said, the steelseries rival 650 gaming mouse is suitable for FPS gaming.

Besides these extra buttons, the mouse contains the DPI button. This button is located below the scroll wheel. With it, you are able to adjust the DPI settings and switch through various programmed DPI profiles. If you don’t want to use them, you can always rebind them using the Steel Series Engine.

Just like the Rival 600 mouse, the Rival 650 is equipped with a “SteelSeries TrueMove3+ Dual Sensor”. This sensor has a 32 bit arm processor, a response time of 1ms and a maximum tracking speed of 350 IPS.

The advantage about this type of sensor is that it gives you the fastest response and zero lagging, which is great. Also, the TrueMove3 sensor is made of a high quality, and with multiple settings, which allow you to customize based on your preferences.

The steelseries rival 650 utilizes the Steelseries Engine 3.12.13 software program that allows you to adjust the keybinds as well as the DPI settings.

Also, the steelseries Rival 650 comes with a full RGB lighting which can be customized on your preference in locations on the mouse. As we mentioned before, this model has 8 RGB zones, which can be controlled independently.

The Logitech G502 is a popular gaming mouse that uses an optical sensor and a wireless connectivity function.

One of the factors that make this a very well-known mouse is the size. When compared to other mice, the Logitech turns out to be one of the largest of its make.

With an average weight of 114 grams, the Logitech G502 lightspeed is only slightly lighter than the Steelseries Rival 650.

If you love to have a lighter mouse then you can use the Logitech model as is, but if you prefer heavy-duty mice, you have the option to add in weights.

The bottom of the G502 light speed has a magnetic plate onto which you can add the weights that come in the box. The weights combined can weigh the mouse down by up to 16 grams (4 X 2g plus 2 X 4g).

Measuring at a length, width and height of 132 mm, 75 mm and 40 mm respectively, the Logitech G502 light speed is, without a doubt, larger than the Steelseries rival 650.

It is designed to work with the USB function, unlike the Steelseries model that can also function as a wired mouse. Overall, its design makes it a very comfy mouse that you can use for hours.

While the number of keys may seem a little intimidating, they are essential. After all, you can program them in any way you prefer.

Logitech G502 is equipped with an optical sensor that gives zero acceleration, smoothing or filtering across the entire DPI range. So, you won’t have to be worried about rough movements in games.

The Logitech G502 has a 32-bit ARM microprocessor. Also, it gives you the flexibility to adjust the DPI from as little as 100 DPI to 16000. Speaking of which, you can change this setting in 100s.

However, the Logitech models have a lower maximum acceleration of 40 G, unlike the Steelseries that holds the lead with a maximum of 50 G.

Similar to the Logitech G502 proteus spectrum, the light speed model has RGB lighting that is fully programmable. As we said before, it is a 2-zoned RGB light that can’t be adjusted differently.

With the Logitech Gaming Software (commonly known as the LGE), you can modify the lighting, DPI, and the keybind settings. And since the mouse has 11 programmable buttons, you have so much room for modifications.

While many characteristics have been explained in this post, the one that will choose will entirely based on what you are into.

If you like larger gaming mice, you will love the Logitech G502 lightspeed. On the other hand, if you are into smaller and faster mice, choose the Steelseries rival 650.

link to Best Waterproof Marine Speakers On A Budget

Continue Reading
link to Do Skar Audio marine speakers deliver on their promise?

Skar Audio Marine Speakers are advertised as being high-quality and durable, but does that hold up to scrutiny? In this article, I will share with you helpful information following a few weeks-long...