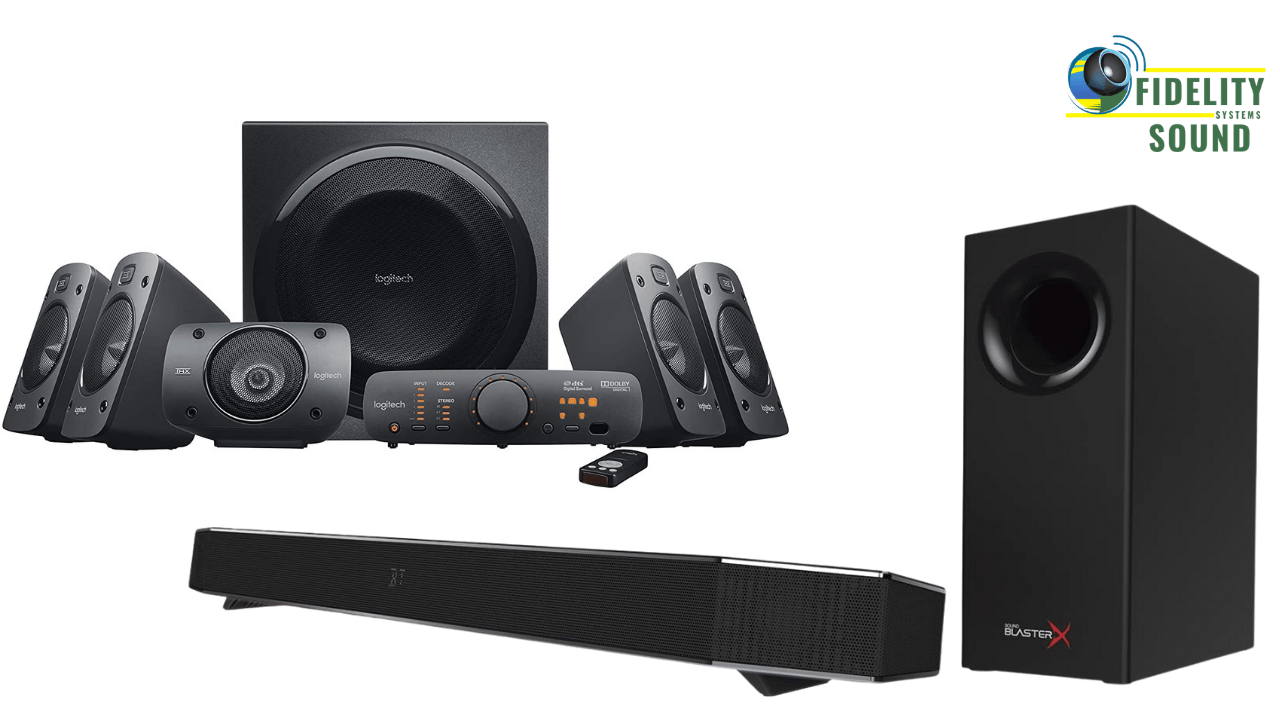 What is the difference between Logitech z906 and Creative Sound Blaster Katana?

The Sound Blaster Katana boasts of a Dolby system surround quality delivered through its 150 watts 3D speaker set up that is uniquely designed for gaming sound setup. In contrast, the Logitech Z906, on the other side, delivers a relenting sound output of about twice the output of the Sound blaster Katana.

This is a big deal for most gamers, especially those whose gaming set-up for sound card output demands maximized use of space and speakers layout to achieve a good sound quality.

When it comes to choosing which is better between the two speakers, it depends on the persons preferences. The sound blaster katana is more suitable for gamers, in fact it is manufactured for gamers even though it can be used for other things as well while the Logitech Z906 is a home theatre system. The system comes with four satellite speakers, a subwoofer and a console control in order to control the system.

Are Floor Standing Speakers Better Than Bookshelf? ( It’s Not What You Think!)

Is Soundbar Better Than Speakers For PCs

The Logitech Z906 is a 5.1 home theatre speaker system. The system has a good performance and build quality. It also supports many features and inputs. This speaker is so THX certified. It comes with a subwoofer and 5 satellite speakers. You can also place the main unit under the TV or on the desk.

These satellite speakers do not have proprietary connections, instead it uses a regular wire for the connection.  They can also be mounted on the wall. This gives you a good chance of having many places on where to place the speakers. The speaker has its inputs on the subwoofer. However, it lacks HDMI connections. It also has two optical inputs and one coaxial input. With thee inputs you can be able to connect your consoles as well as DVDs to the speakers. It also has a 3.5mm Jack and other phono sockets.

In the package, there is also a remote control for further controlling the system and a control console. The satellite speakers are very small in size. This makes them a great choice for adding to your PC quality. The speakers are made of plastic material.

They have a design that feels sturdy. The satellites have grilles that are made of wire mesh. They also have a grey finish. In the package, you will also find wires for connecting the speakers. The wires measuring 4.6 meters are for the fronts and the ones measuring 7.6 meters are used for the rears.

The speakers also come with a subwoofer that has a shape of a cube. On the side of the cube, there is a bass port. It is also small in size and does not weigh a lot. Just like the satellite speakers the subwoofer also has a grey finish.

The subwoofer has an 8-inch driver that comes at a power of 165 watts. The four satellites have a 3- inch aluminum phase plug drivers. In total the whole system has a total RMS power of 500 watts. The frequency range of this system is 35 Hz to 20kHz. The speaker does not use Dolby Atmos or DTS:X.

This system is also THX certified. This simply means that the system has been tested by experts so that it produces good quality sounds.

Most of the connections in this system are found on the subwoofer, they are placed at the back of the subwoofer. Other controls are found on the control console. This lets you access them very easily. We have two digital optical inputs and one coaxial input. There are also 5 speaker terminals, these are used to connect the satellites and the center speaker. There is also a port that can be used to connect it the console. Other inputs include the headphone jack and an audio input. It also comes with a remote control that has big buttons made of rubber.

The setup process of this system is very easy. It comes with a manual that provides all the necessary instructions for how you can setup and place your speakers. All the connections that the system uses are very easy to use. The speakers are calibrated manually because they do not have auto calibration. For content that is bass heavy, the subwoofer performs well and it can be too loud. Overall, the sound produced are good but the frequencies lack a little.

The sound blasterx katana is a wireless speaker. It provides great sounds and has a good design overall. The soundbar does not take up much of your space on the desk and it can get very loud. The katana looks like a soundbar. It is available in black and the outside has aluminum finish. This easily fits on your desk and it can be placed under your monitor because of its slim nature. It also makes use of Multicore audio DSP. The sound blaster is also good for rooms which are smaller and provides room filling immersive sounds.

The katana is not very tall, it only has the dimensions 8.1 x 26.7 x 19.7 inches. The katana has some of the controls placed on the top of the bar. You will find five buttons and a button on the right end and another button on the left end. Just above the buttons there is a sound blasterx logo. The katana is slim at has a shirt profile.

The audio system also includes a subwoofer. The subwoofer is not large but it does well with being on the floor. Other connections can be found on the back of the sound bar. It has connections like a subwoofer plug, ac power plug and a USB port. It also comes with a cable that you can use to connect the system to your TV, game console or PC. Other connections include headphone jack and microphone.

The audio system comes with an IR remote that allows you to control the system at your fingertips. The IR remote has 15 buttons in total. It has a power button, mute button, pause/play, change tracks button, pairing button and many more.

The katana also has a lighting system. It uses a system called aurora which has 49 LED lights that can all be programmed. It also comes with software called sound blaster connect software, with the software you are able to customize the lights to your liking. It also gives you up to 16.8 million colors that you can choose from. The software also lets you create lighting profiles and use these profiles.

Setting up the katana is really easy; it has a lot if connecting options. The katana is very versatile and can support a lot of inputs. This audio system is also very compatible with a lot of devices. It uses Bluetooth connection which allows you to connect to devices wirelessly. It can be used on personal computers, Mac, PS4 and many other game consoles. It also has multiple inputs including the optical in and USB input.

The speaker provides immersive sounds when gaming or watching movies. It has features like BlasterX acoustic engine and Dolby digital 5.1 decoder to ensure that the sounds that it offers are of high quality and immersive. The katana is also versatile and supports a lot of connections.

The katana has 5 drivers. It contains two mid-bass drivers, two tweeters, and a long throw driver. The mid-bass drivers and tweeters are found in the soundbar whereas the long-throw driver is found in the subwoofer. These are powered by amplifiers to ensure that the sound they deliver is high-quality sound. The sound quality is also enhanced using the digital signal processor (DSP). This ensures that the audio performance delivered is excellent. The katana has a total output of 150W.

The sound BlasterX Katana and the Logitech Z906 are very good speakers. These speakers are different in multiple ways, for example the sound blaster katana is usually used for gaming while the Logitech Z906 can be used as a home theatre system.

The katana also provides RGB illumination to further improve your gaming experience. The Logitech Z906 on the other hand does not have any lighting and illumination. They provide excellent sounds and give you a full sound signature. However, both of these audio systems do not support HDMI.