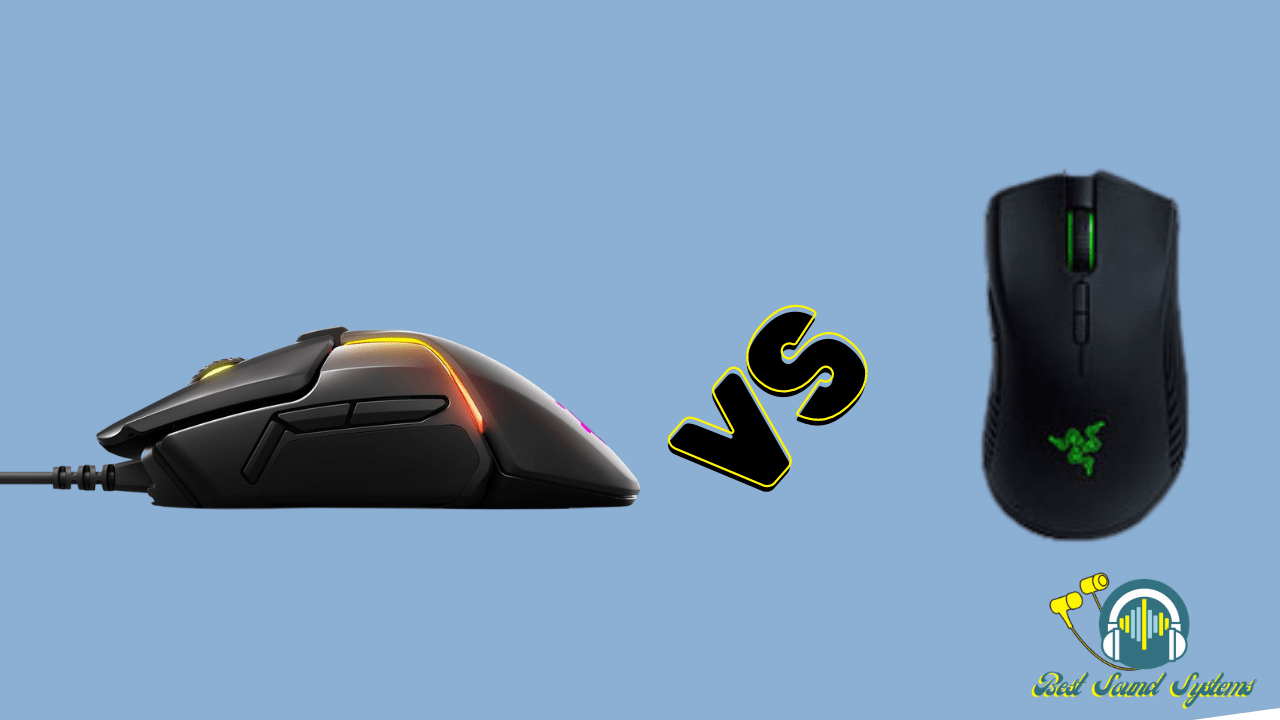 Ever wonder which gaming mouse between Razer Mamba Wireless vs. Steelseries Rival 650 is the best?

Listen, between you and me, the Steelseries rival 650 and the Razer mamba are both great gaming mice. And, you don’t have to take my word for it, but when you take a closer look at the incredible features that they have, you will not be surprised that both Steelseries rival650 and Razer mamba wireless are increasingly growing their fanbase, driving demand on the market, and have found themselves in this comparison article.

Can’t decide on which one you should get? This post will help. So, which one between Steelseries rival 650 and Razer Mamba is the best?

While the razer mamba has a 4000 DPI advantage, the rival makes up for this with its great design, which gives you a comfortable experience.

However, the rival 650 does come at a relatively higher price than the Razer mamba. On top of that, the Steelseries rival 650 comes with weights, which means you are able to adjust the weight of the whole mouse. This makes it very flexible.

Steelseries rival 650 vs. Logitech g502 lightspeed Which Is Better? (Its not What You Think!)

The table below looks at all the differences between these two models.

Having looked at the differences, let’s cover them one by one, starting with the Rival 650.

SteelSeries has satisfied gamers’ needs with some of the best gaming accessories around, and the Rival 650 is no exception. It comes with a great design and delivers some of the most outstanding performances.

At first glance of the Rival 650, you will immediately notice that you can’t really differentiate it from its predecessor, the steelseries rival 600. In fact, they are complete mirror designs.

The only difference is absence of the cable in the rival 650. Instead of having the cable at the front, this gaming mouse has a recessed micro-USB port, into which you plug in the charging cable.

The design of the rival 650 model (and its predecessor) incorporates SteelSeries’s signature, which blends the hard lines to the smooth curves.

Thanks to the Soft Touch paint applied onto the palm as well as the primary mouse buttons, the rival 650 remains in first place on comfort, especially when compared to the build quality of other gaming mice.

We can’t deny that the soft Touch material’s matte black makes the mouse look a little more like the bat mobile. Nonetheless, the smooth rubber siding is said to offer a firm grip.

Another great part of the rival 650’s design are the buttons. Besides the clickable scroll wheel, the mouse’s design incorporates 7 extra buttons.

The primary mouse buttons, which have been rates for 60 million clicks, are split from the body and offer unfailing tactile sensation.

Three slim thumb buttons are built on the left side of the mouse. While these buttons offer a solid and constant feel, their placement is somewhat off. The only button that offers easy access is the closest back button.

What about the lighting? The RGB lighting is split into four areas, with eight zones in total. Two strips that are located on each side can be configured with three distinct colors.

As we said earlier, the Steelseries rival 650 weighs at 121 grams. Moreover, it comes weights that weigh about 4 grams each. With all these weights included, you can add up to 32 grams of weight to your 121 grams of initial weight, bringing your total weight to somewhere around 153 grams.

The Rival 650 comes with the SteelSeries Engine software, which allows you to control a lot of features on the mouse. What makes the program so effective is that it even points out computer settings that could impact the mouse’s efficiency.

With the Quantum Wireless connection, the Steelseries rival 650 delivers a 1,000Hz polling rate, so rest assured, there won’t be any difficulties on the connection.

Also, the rival 650 utilizes a TrueMove 3+ sensor and up to 12,000 CPI with one-to-one tracking. According to steelseries, the sensor can sustain speeds over 350 IPS and accelerations up to 50G.

On the Battery, the performance is really nice. With lighting turned off, you can go through a week with considerable gaming and still have a lot of battery life to spare. The lights will obviously drain the battery power faster. However, you will enjoy the fast charging features.

The Razer mamba wireless gaming mouse offers some of the best mouse speeds, as we mentioned before. Also, when compared to the Steelseries rival 650, the razer mamba is very affordable. Here, we want to go in-depth on its design, extra features as well as its performance.

On the design, the Razer mamba does seem to resemble its predecessors. The design incorporates 7 buttons, all of which are fully programmable.

First of all, you have the primary mouse buttons, (which, if I may add, have been rated for up to 50 million clicks each).

Like a majority of gaming mice, the Mamba Wireless is a right-handed model with a black-and-gray color scheme.

Also, you have a two-zone RGB lighting (found in the scroll wheel and the palm rest) adds a bit of pop to an otherwise staid design. Speaking of lighting, the mouse’s RGB illumination is said to support up to 16.8 million colors.

Also, the Mamba Wireless design features a spongy texture on the grip that makes this model immediately stand out from other mice. When you play games for a longer time, which you likely will, the grip ends up feeling a little smudged.

The mouse has an average weight of 3.74 ounces- that’s if you don’t count the cable.

According to the manufacturer, Razer Mamba Wireless is equipped with an exclusive 5G Advanced Optical Sensors that support up to 16,000 CPI with 450 IPS and 50G acceleration.

All the buttons on the Razer mamba produce a satisfying click when pressed. Besides these buttons, the Mamba Wireless comes with Razer Mechanical Switches. On the wireless front, the mamba wireless relies on a 2.4-GHz dongle type of connectivity.

Overall, the Mamba Wireless’ design is on the same level with other Razer mice, but offers similar performance in a less comfortable design.

As we covered earlier in this article, the razer mamba comes with an embedded operative system which is called Razer Synapse 3. This software performs a lot of functions on the mamba.

Razer Synapse 3 tells you about the Razer Mamba Wireless’ battery life. Also, you are able to adjust power in 2 settings.

According to Razer, the mouse offers up to 50 hours of gameplay after a single full charge. However, with the RGB lighting on, you can recharge the Mamba two days after using it- that’s when the Wireless Power Saving setting is at 15 minutes and the Wireless Low Power Mode is set to about 30%.

Compared to operating systems in other gaming mice, Synapse shows a battery life percentage instead of an icon.

The Razer Mamba Wireless features a Razer Synapse 3 management software that saves custom profiles to the mouse storage and the cloud.

With that said, you can cycle through five different CPI profiles with the Synapse. In addition, you can assign functions to the 7 programmable buttons that we talked about.

Finally, the Mamba Wireless is said to support “basic input” with the Xbox One.

On paper, the Steelseries rival 650 and the Razer Mamba Wireless seems a lot like the rest of the brand’s other gaming mice, especially when you consider their specifications, design as well as the extra features.

On the other hand, the first great feature of the Razer Mamba is the 4000 DPI advantage. The mamba also comes at an incredibly lower price, so this is a suitable option if you are on a lower budget.